Have You Suffered Severe Gastrointestinal Problems?

Benicar, a popular treatment for hypertension, has been the subject of multiple lawsuits filed against the prescription drug’s manufacturer, Daiichi Sankyo. Plaintiffs allege that Benicar was defectively designed and manufactured, as it has been associated with enteropathy (destruction of the small bowel). Furthermore, the company is accused of engaging in deceptive marketing practices and of understanding the true risks of the bowel injury adverse side effects of Benicar. Having been heavily prescribed for over a decade, cases against Sankyo continue to mount as patients come forward to report adverse health effects that the manufacturer had failed to properly warn on.

Introduction to Benicar and its Side Effects 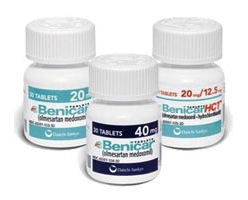 Approved by the Food and Drug Administration (FDA) in 2002, Benicar is an angiotensis II receptor blocker (ARB) manufactured by Sankyo that goes by the clinical name of olmesartan medoxomil. Other trade names the product is sold under include Tribenzor and Azor. The drug has become the Japan-based pharmaceutical company’s highest selling product in the United States, with over ten million prescriptions written in 2012 alone. Benicar is used to treat patients with high blood pressure, as it helps to narrow the blood vessels and improve the circulation of blood throughout the body. Reported side effects include chronic diarrhea, vomiting, extreme weight loss, malnutrition, and dehydration causing hospitalizations and debilitated states.

Some patients who have used Benicar for at least 1 year to treat high blood pressure have required extended hospitalization due to gastrointestinal side effects, including sprue-like enteropathy, malabsorption, malnutrition, chronic weight loss, dehydration, necessitating feeding tubes, renal failure from severe dehydration due to the small bowel injury. Benicar causes an intestinal problem [death of the small bowel villi] that has similar symptoms as Celiac’s disease.

In fact, many patients are misdiagnosed as having Celiac disease if the proper tests for Celiac disease are not performed.  Celiac disease is caused by an inability to digest gluten, sometimes called “gluten intolerance” — that results in the atrophy of the intestinal tract. Benicar has been shown to cause atrophy of the intestinal tract from patients taking the drug greater than 1 year who do NOT have Celiac disease.  Benicar -induced enteropathy can take as long as 1 year to fully develop, which means that the patient may begin to feel the side effects of Benicar after prolonged use of the drug (Tran H. Tran and Hanlin Li, “Olmesarta and Drug-Induced Enterotaphy,” Pharmacy and Therapeutics 2014; 39 (1): pp. 47–50). Furthermore, since the symptom has been often confused for Celiac’s disease, many patients who suffer from sprue-like enteropathy did not receive a proper diagnosis.

Benicar has also been associated with a higher risk of heart disease among patients with Type 2 diabetes. The FDA was prompted to conduct an analysis of the potential heart risks of olmesartan after two clinical trials that found that the drug could lead to an increased probability of sudden death, heart attacks, and strokes. In a June 2014 drug safety communication, however, the FDA announced that the evidence was inconclusive and that it would not change its recommendation for use of Benicar. Other researchers have disputed the FDA’s findings and to date there is no clear consensus.

Negligence and Deceptive Marketing Regarding the Risks of Permanent Bowel Injury

Daiichi Sankyo has been accused of negligence during the design and production of Benicar, as well of deceptive marketing practices for failing to communicate the true nature to Doctors and patients of the severe, debilitating, gastrointestinal risks attached to the use of the drug. The manufacturer has also been faulted for conducting inadequate research before releasing Benicar to the public and is alleged to have withheld clinical data when marketing the drug to clients. One issue is that many of the studies that were conducted were short term — based on observations that spanned two to three months, whereas this drug is taken over many years and many of the reported side effects can take a year to emerge. As the number of patients who suffer from an increased risk of enteropathy or bowel injury grows, it is expected that so will the number of lawsuits filed against Sankyo.

Patients may be entitled to compensation if they were on Benicar for at least a year, and were diagnosed with enteropathy, malabsorption syndrome from bowel damage, chronic diarrhea, malnutrition, acute renal failure that was documented by a physician and other conditions were ruled out.  A lawsuit could include claims for medical expenses, rehabilitation services, and lost wages. The compensation may also cover non-economic costs, such as pain, suffering, and emotional distress. If you or a loved one has suffered from an adverse side effect as a result of Benicar use, contact our Kansas law offices to schedule your complimentary case review today by Attorney, Liz Dudley.