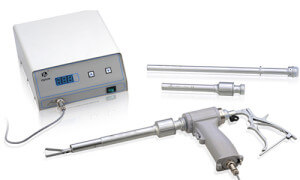 INJURIES: Spreads undetected type of uterine cancer [which is inside the fibroid tumor] into the abdomen.

Approx 1 in 352 women with fibroids have some undetected cancerous cells inside the fibroid or uterus which this surgical device spreads into the abdomen upon removal. The result is that this device upstages the cancer from Stage I [which if removed whole would not have spread throughout the body] to Stage IV causing leiomyosarcoma [uterine cancer] which is deadly to most women. It is a known medical fact that early diagnosis of cancer increases your chances for survival.

In April 2014, the FDA issued a safety advisory, stating that the laparoscopic power morcellator, a surgical device widely used to remove fibroids in the uterus, was responsible for the spread of a potentially deadly and aggressive form of cancer in thousands of women across the U.S. This was the first public acknowledgement of the risks with this device– long after the company knew the actual, increased risks. J&J refused to warn the FDA, Doctors and women in this country and when they did give information on the risks, it was inadequate and conflicted with the scientific data that J&J & the FDA were aware of.

WHAT IS A POWER MORCELLATOR?

It is an electrically powered surgical tool with rotating blade primarily used during a hysterectomy or myomectomy [fibroid removal] to remove uterine fibroids [also known as leiomyomas], which are common growths in the uterine wall. Up to 80% of women will have uterine fibroids during their lifetime. During surgery, the morcellator is inserted into the woman & the blade rapidly peels, cores & fragments the fibroid tissue which is removed through a small incision. It is also used to remove the uterus during hysterectomies.

J&J marketed this device as being less invasive than a traditional laparoscopic hysterectomy or myomectomy, patients had less recovery time , less bleeding, less scars, less days in the hospital & lower mortality rates than a total abdominal hysterectomy done by either open laparotomy or laparoscopy.
These so-called “benefits” are greatly outweighed by the fatal danger when used in women with an unsuspected malignant uterine sarcoma–typically a leiomyosarcoma– hidden within the fibroid tissue. In these cases, the morcellator disseminates the cancerous tissue throughout the woman’s abdomen, pelvis or other organs, resulting in devastating injuries & death. The FDA estimates that 1 in 352 women undergoing fibroid removal or hysterectomies have undetected uterine sarcoma. However, J&J has disagreed with the FDA & made claims that the incidence is rare, 1 in 100,000 — then they changed it to 1 in 10,000 — then 1 in 7,500. What is the acceptable risk when there is a safer alternative with no risks? I would argue any risk of spreading this type of virulent cancer is unacceptable if it is happening to you.
As a plaintiff’s attorney, we pursue legal claims involving products liability law involving both defective design and failure to warn. The manufacturer knew of the potential presence of cancer in women’s fibroids since the 1990’s and the device’s ability to spread the cancer to other organs, and the existence of a safer, alternative design. saferalternative design theory involves the use of a “closed system”–such as an interoperative bag–that prevents the cancerous tissue from spreading throughout the body.

REGULATORY HISTORY OF THE POWER MORCELLATOR

In 1995 this device was cleared for sale through the 510[k] process and gained popularity among gynecologic surgeons since then. It is estimated that morcellation is used in at least 11% of the nearly 500,000 hysterectomies performed annually in the U.S. This is approximately 55,000 to 75,000 of women who are unknowingly being exposed to the spread of this cancer. They will not know they have this cancer unless one of the following occurs: the pathologist finds the cancerous cells in the tissue removed after surgery; or they develop symptoms months or years later when the cancer is at an advanced stage – which is very bad for a women’s prognosis.
Unfortunately, the first public notification that this device had any such risks was in April of 2014 when the FDA issued a safety alert. The FDA warned that the laparoscopic power morcellator, a surgical device widely used to remove fibroids in the uterus, was responsible for the spread of a potentially deadly and aggressive form of cancer in thousands of women across the U.S. The FDA estimated that 1 in 352 women undergoing fibroid removal or hysterectomies have undetected uterine sarcoma which is at risk of being spread throughout the body by this device.
After this FDA advisory, several large hospitals, such as the Cleveland Clinic and Brigham & Women’s Hospital in Boston, suspended Morcellator procedures. Some health insurers have placed restrictions on coverage for morcellator procedures or have stopped covering these procedures completely.
In July of 2014 the FDA held hearings on the risks of spreading cancer from this device. J&J claimed they took actions immediately when they learned the risks of the device were greater than they anticipated. The American Association of Gynecology representative wanted the FDA to keep the device available as is. There was moving testimony from a cancer victim of this device, Amy Reed, MD. Dr Reed was an anesthesiologist who developed stage IV uterine sarcoma post hysterectomy with the power morcellator. Dr Reed had no prior history of any cancer until after her hysterectomy using this device.
In November 2014 the FDA took more aggressive action by issuing a BLACK BOX WARNING for power morcellators for the majority of women undergoing a hysterectomy or myomectomy for uterine fibroids. They noted that “the use of laparoscopic power morcellators during fibroid surgery may spread cancer, and decrease the long-term survival of patients.” The warning included contraindications for the device, including use in the “removal of uterine tissue containing suspected fibroids in patients who are peri- or post menapausal” and “in gynecologic surgery in which the tissue to be morcellated is known or suspected to contain malignancy.”

In July 2014, J&J recalled this device but did not require hospitals to return the device to J&J–. many continue to be in use today. Other manufacturers have not recalled their devices as of 7.2015.
Please spread the word to other women you know who may be undergoing a hysterectomy or fibroid removal. They must ask their doctor if he plans on using this device and refuse to give consent .
If you or a loved one have experienced any of these side effects, please call today for your free evaluation as you have limited amount of time to protect your rights.