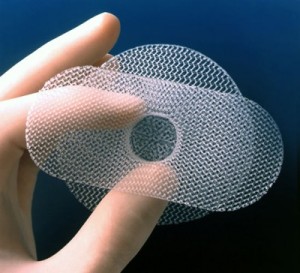 According to unsealed court records, CR Bard Inc. sold vaginal-mesh devices made of a plastic that its manufacturer warned was not suitable for human surgical use. Managers at Bard’s Davol unit used a resin-based plastic made by a Chevron Phillips Chemical Co. unit to produce hernia-repair mesh after the material’s supplier officially registered a warning that it shouldn’t be permanently implanted in people, according to e-mails and documents in a lawsuit over Bard’s implants.

In 2004 and 2007 e-mails filed in federal court in West Virginia, a Davol executive warned colleagues not to tell Chevron Phillips or other resin makers that the company was using the material in medical devices placed in humans.
Suppliers such as Chevron Phillips “will likely not be interested in a medical application due to product-liability concerns,” Roger Darois, the Davol executive , said in a March 2004 email. “It is likely they do not know of our implant application. Please do not mention Davol’s name in any discussion with these manufacturers.”
Thousands of women who blame Bard’s Avaulta line of implants for their injuries said the files show Davol officials knew the resin-based mesh wasn’t proper for human implantation and tried to cover up their use of the materials.

Phillips Sumika, a Texas-based unit of Chevron Phillips Chemical, filed a required safety data document, called a “Material Safety Data Sheet,” with the U.S. Occupational Safety and Health Administration about the Marlex polypropylene resin used in some Bard hernia and vaginal implants. On the 2007 document’s front page, Phillips Sumika put a “Medical Application Caution” about the product.
In the MSDS sheet from Chevron [an unsealed exhibit in the Cisson v. Bard trial], Chevron stated “Do not use this Phillips Sumika Polypropylene Co. material in medical applications involving permanent implantation in the human body or permanent contact with internal body fluids or tissues”.

The MSDS warning stated that the resin-based plasctic “may react with oxygen and strong oxidizing agents, such as chlorates, nitrates and peroxides.” According to experts, human bodies can produce such oxidizing agents and the reaction can cause the mesh to erode.

Despite the warning, Davol officials bought Phillips Sumika’s resin-based plastic from other companies that bought it in their own names, according to testimony in the Cisson case. Davol used the material as the base for hernia repair and vaginal mesh devices according to legal filings.

Erik Gordon, Univ of Michigan business professor, noted that the Bard Avaulta TVM case shows an abuse of the 510(k) process. According to Gordon, “The alleged conduct is unconscionable — how can anyone ever trust a company that knowingly disregards safety warnings from its own supplier and covers up its conduct?”

The Federal Judge in Cisson v. Bard unsealed Bard officials’ and medical experts’ pretrial testimony on the lack of human testing of the mesh before the company began selling it in the U.S. in 2005. The mesh was cleared through the FDA’s 510(k) system, which allows medical devices to reach the market without human testing if regulators decide they are similar to products already for sale.